Looks like Chris Brown is in trouble again. Some Kenyans are right now crying that he should be deported from their country after he allegedly smashed a fan’s phone when she tried to take a selfie with him on his arrival at the Moi International Airport, Mombasa today. 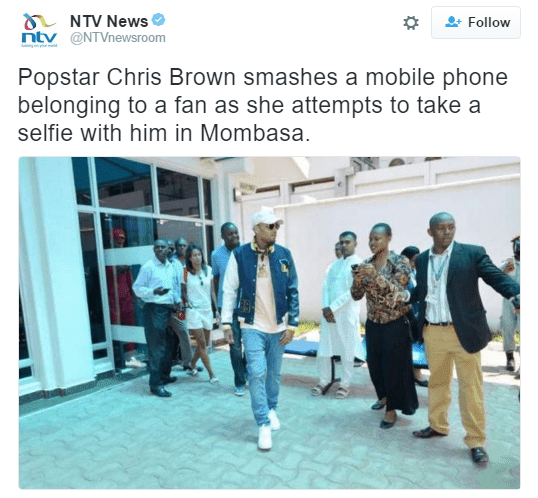 While speaking to the NationKenya, the fan, who said she was “deeply disappointed by the artiste’s action,” wondered why Brown, a renowned singer, grabbed her phone and threw it away, landing on the floor.

“I was with my friends and was trying to take a selfie when he grabbed the phone from
the back. I was shocked.

“I have a ticket for the show but I won’t attend it. Brown should know that we like his songs but he has to respect his fans,” she said.

“I bought my iPhone 6 last month at Sh90,000 and seeing it being tossed off like a mulika mwizi (a cheap feature phone) was bad.

“Although it is only the screen protector and back cover that broke, I cannot imagine how I would have felt had it been damaged,” added the fan, who said she did not want her name mentioned.

Mr Brown had just landed in Mombasa for his much anticipated show tonight.

Meanwhile, this video has just emerged of Chris arriving and it doesn’t show Chris smashing the lady’s phone. Some people it has been edited to cut out the phone part.

Creating a twist to the matter, a twitter user posted a video of what actually happened (according to him though). “This video brings to an end debate. Chris Brown didn’t break any phone only Crushed self esteem #DeportChrisBrown”, he captioned.

This video brings to an end debate. Chris Brown didn't break any phone only Crushed self esteem pic.twitter.com/nLE3SVvTTY #DeportChrisBrown